Did You Know Moments »
Filter Projects »
Geosyntec Consultants
Exceptional Solutions
Clients choose Geosyntec based on our record of providing advice, recommendations, and solutions of exceptional value.

From highly scientific studies to large construction projects, our staff has extensive experience, the latest tools and technologies, and dedication to client service.

Our mission is to help clients succeed through delivering exceptional service and best-value solutions for their endeavors involving the environment, natural resources, and infrastructure. 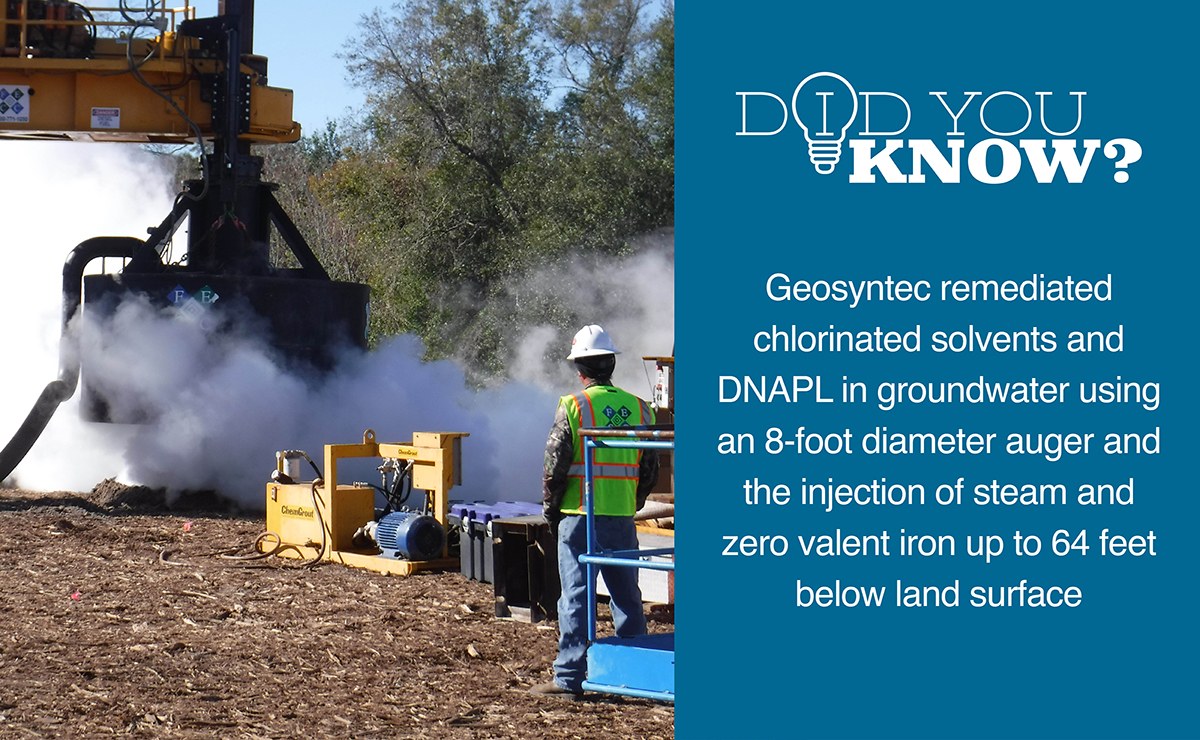 Tetrachloroethylene (PCE) concentrations in groundwater in the source zone of a former syringe manufacturer were indicative of dense non-aqueous phase liquid (DNAPL). Distinctive to the Site, the upper surficial aquifer is separated from the lower surficial aquifer by two clay layers with a vertical head gradient (downward) across the clay layers of 40 feet. The significant head difference resulted in the vertical downward migration of the PCE DNAPL into/within the clay layers and then forming a large plume in the lower surficial aquifer beneath the clay layers. Over time, migration of the contaminants, including PCE and its breakdown products, resulted in an expansive dilute dissolved plume throughout a residential area with multiple private water supply wells. The primary project objective was to refine the existing conceptual site model and develop and implement a remedial strategy to address the PCE/DNAPL source material diffused within the clay layers and representing a long-term source of flux to the dissolved plume.

As part of Geosyntec's site assessment and remediation services at the Site, a high-resolution site characterization (HRSC) investigation was performed to obtain Florida Department of Environmental Protection (FDEP) approval of a Site Assessment Report. Upon completion of a focused feasibility study to evaluate remedial alternatives, Geosyntec prepared a Remedial Action Plan (RAP) for remediating chlorinated solvents in groundwater using an innovative, aggressive remediation strategy consisting of a large diameter auger combined with the injection of steam and zero valent iron (LDA/steam/ZVI), followed by natural attenuation monitoring (NAM). Prior to remediation, Geosyntec performed pre-demolition assessment activities and provided oversight for the demolition of an onsite building.

During the three months of active LDA/Steam/ZVI implementation, an estimated 400 to 500 pounds of PCE were remediated (not considering the mass destroyed in situ as a result of the ZVI). Post-LDA soil and groundwater sampling indicated that the treatment goals were achieved. CVOCs were not detected in saturated soil samples collected in the source zones, and groundwater samples collected via direct push technology and monitoring wells were well below concentrations that facilitated transitioning of the site to natural attenuation monitoring. Post-remediation groundwater monitoring has also documented that no rebound has occurred in the treatment area following one year of monitoring.

No pages found in your document. What is a Quick Qual?

Geosyntec is a consulting and engineering firm that works with private and public sector clients to address new ventures and complex problems involving our environment, natural resources, and civil infrastructure.